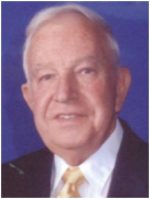 June 24th, 1926 - February 14th, 2016
Robert E. Kabat died on February 14, 2016. Born on June 24, 1926, in Cleveland, Ohio to the late Michael and Amelia Kabat.
He was preceded in death by his brothers, James Kabat, Richard Kabat; sister, Ruth Kabat Svec. He is survived by his sister, Alice Kabat Mazanec.
Robert was married to the love of his life, the late E. Luella Kabat, for 63 years. His greatest treasures he said were his wife and children, Judith Kabat Cross (Michael), Canal Fulton, OH, Robert M. Kabat (Margaret), Maumee, OH, Shelly L. Kabat Raines (David), Cincinnati, OH, and James D. Kabat (Bridgette), Perrysburg, OH. Robert also had 5 grandchildren and 15 great-grandchildren.
His most exciting experience was serving in the US Navy from 1943 to 1946 where he served in the Atlantic, European, North African and Pacific Theaters aboard the USS Laub DD613, USS Stevenson DD645, USS Rowe DD564 and USS Dortch DD670. Robert graduated from Bowling Green State University with a B.S. in Education in 1951, later earning his Master of Science in Education and Educational Specialist degrees from the University of Toledo. He started his career teaching at Delta High School, Delta, OH in 1951, and in 1952 moved to Maumee at Union School to begin a 33 year career with the Maumee Schools. He was named principal of Fort Miami Elementary School from 1954 to 1983 and Fairfield Elementary until 1985 when he joined the Lucas County Office of Education until 1991. Robert was proud to be the principal of the first elementary school in Ohio to be inducted into the North Central Association of Secondary Schools and Colleges. He was an assistant professor of education at BGSU 1963-1973. He was President of the NW Ohio Principals Association, President of the Maumee Exchange Club, and in 1971, he chaired the committee to revise the Master Plan for Maumee. His many memberships included the Ohio Education Association, Ohio Elementary Principals Association, National Elementary Principals Association, the Juvenile Justice Committee, North West Ohio Health Planning Commission, the Toledo Zoo Education Committee and a 15 year member of the Selective Service Board. Additionally, Robert was a founding member of Alpha Sigma Phi fraternity at BGSU, and member of Kappa Delta Phi honorary, Phi Delta Kappa honorary and the American Legion.
Bob will always be remembered for his keen sense of humor and storytelling. He was always ready to help friends, neighbors or those in need. However, he will also be remembered for his cheap cigars and even cheaper beer! His garage is a testament to his motto of never throwing anything away and always opening a new can of spray paint for whatever project. Hence, a garage full of used spray paint cans!
Bob and Luella's favorite holiday was Valentine's Day. They would always go all out getting cards, gifts, flowers and sharing so much love with everyone. It only seemed fitting that Bob would choose February 14th to join Luella.
On Saturday, February 20, 2016, visitation will be held at St. Paul's Episcopal Church, 310 Elizabeth St., Maumee, OH 43537 from 11 a.m. to 2 p.m. in the church gymnasium. Services will follow at 2 p.m. with burial immediately following at Riverside Cemetery. Memorials may be made to a charity of choice . The Maison-Dardenne-Walker Funeral Home, Maumee is assisting the family with arrangements. Online condolences may be made at
walkerfuneralhomes.com
As published in The Blade
Published in Toledo Blade on Feb. 17, 2016