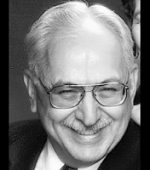 June 23rd, 1933 – January 3rd, 2010
SASS Carl A. “Papi” Carl A. “Papi” Sass, devoted Christian, husband, father, grandfather, godfather, brother, uncle, cousin, and friend, passed away Sunday, January 3, 2010, at Mercy Saint Vincent Medical Center from complications associated with microscopic polyarteritis nodosa, which he had been suffering from for the past almost-three years. He was born to Clarence and Clara (Rohaus) Sass on Friday, June 23, 1933, graduated with a degree in printing from Irving E. Macomber Vocational Technical High School of Toledo, OH in 1951, served honorably in Alaska during the Korean War as part of SCARWAF (Special Category Army With Air Force) / 18th Group / 621st Company from 1953 to 1955, and received his Bachelor’s (in education) and Master’s (in administration and supervision) degrees from the University of Toledo, where he was a member of the Phi Delta Kappa professional education association. Carl was active in Maumee City Schools for 30-plus years as an educator, administrator, tutor, and coach. He served as a sixth-grade teacher at Union Elementary School and taught physical education, was head of the English Department, and was both assistant principal and principal at Gateway Middle School. He was a founding member and long-time treasurer of the Maumee Educators’ Federal Credit Union (MEFCU) and served as president of the Maumee Educators Association (MEA). Additionally, was coach of seventh- and eighth-grade basketball teams, leading two of them to undefeated seasons, and was involved with and in a myriad of other school-related committees and activities. Carl was a fifty-plus-year and very active member of Saint Paul’s Evangelical Lutheran Church in Maumee, serving as president of the Church Council and on many different committees over the years, teaching Sunday School, Alpha, and Catechism classes, and participating in the Luther League program. Related to both church and his love of bowling, he was president of the Toledo Lutheran Men’s Bowling League (TLMBL), directed the TLMBL’s Seminary Scholarship program, and was bowling five-and-a-half times a week, serving as treasurer for many of them, before taking so seriously ill. Shortly after his wife passed away, “Papi”, as he was lovingly called by his friends and family in Guatemala, became very active in the Maumee Rotary Club and with a variety of mission trips to Guatemala associated with both Rotary and St. Paul’s. He went on fifteen different mission trips, including medical-, Fundaniñas (“found little girls”)-, and Habitat for Humanity/Thrivent Builds Worldwide-related ones, where he played Santa Claus, Raggedy Andy, and an elephant for the orphaned girls, helped serve food and drink and provide medicine at Potter’s House, Servant’s Heart, Safe Passage, and the Santa Clara Nursery near the Guatemala City garbage dump, assisted in checking eyes and distributing glasses in the El Petén region, and worked with teams building homes in different areas of Guatemala. Some of Carl’s other interests and hobbies included a love for all sports, including serving as a baseball coach and umpire for Little League through Federation from his twenties through his forties and being a life-long fan of the Detroit Tigers, music, where he loved JS Bach’s “Sheep May Safely Graze”, Handel’s “Messiah”, George Beverly Shea’s “How Great Thou Art”, and just about everything by the Gaither Vocal Band, and both Indian Guides and the Boy Scouts, where he served as “The Big Chief” and “Webelos Master”. He was also “famous” for his singing, singing in the St. Paul’s Choir for many years, and finally, he was a avid bridge player and enjoyed playing with his wife in numerous bridge clubs over the years. Carl was preceded in death by his loving wife, Lois (Metzger); parents; sisters, Virginia, Marvel Morrow-Boros, Mary Jane McConaughey, and Shirley Christensen; brothers, Dale and C. Joseph (Butch); brothers-in-law, Karl (Jim) Morrow, Eugene Boros, Robert (Peck) McConaughey, and Paul Lezon; parents-in-law, Otto and Irene (Gilliland) Metzger, sisters-in-law Donna (Metzger) Funk and Carol (Turner) Metzger, and in-law, Max Hough. He is survived by his adoring sons, Mark and Kyle, “Guatemalan daughters” Gaby Muñoz and Yamilet Tull, “Guatemala goddaughter” Brenda Mor-ales; daughter-in-law, Terri (Hough) Sass; grandchildren, Lynden, Aubrie, and Max, brother Robert (Bob) Sass, sister Doris Lezon; sisters-in-law, Billie (Bob), Lois (Dale), and Barbara (C. Joseph) Sass, and Judy Metzger, and brothers-in-law, Jim Christensen, Elroy Metzger, and Brian Metzger. Visitation will be at the Maison-Dardenne-Walker Funeral Home, 501 Conant Street, Maumee, from 2:00 p.m. to 9:00 p.m. on Thursday, January 7, with a special Rotary Club memorial service at 7:00 p.m., and from 6:00 p.m. to 9:00 p.m. on Friday, January 8. The funeral service will be held at 10:00 a.m. on Saturday, January, 9 at St. Paul’s Lutheran Church, 112 E. Wayne St., Maumee, with entombment to follow at the Ottawa Hills Memorial Park Mausoleum in Toledo. In lieu of flowers, the family asks that all donations be made in memory and honor of Carl to the St. Paul’s Church Guatemalan Mission Fund.